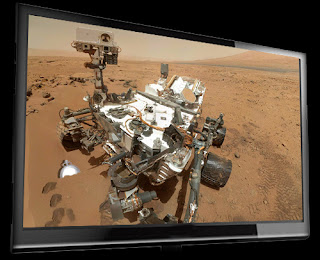 Spender looked over at Parkhill and their mutual expression was, Oh shit.

The senator was on a tour of the NASA facility and the Mars Rover Curiosity was the main event right now. Unfortunately when the senator walked through, they were live. LIVE!

“So we’re live eh?” the senator asked, impressed. “Ooh, what’s that shiny thing over there? Looks like a silver mirror in the dirt.”

Spender swore under his breath. There would be hell to pay, and he hoped he’d have a job in 24 hours.

Marge had had one margarita too many, again, and tequila made her a mean drunk.

She looked up at one of the many TV monitors in the sports bar, including the strange broadcast on some science channel showing footage the Mars Curiosity Rover.

"Puh-leeze," she started again. She had already made a scene over her onion ring mountain appetizer about how the whole space program had been a giant hoax and men were just jumping around on a stage somewhere in the Sixties. "Why that just looks like the desert not 25 miles from here. We camp there all the time Harold." She took a big swig and wiped her mouth with her hand, then burped, loudly.

Harold had never been a conspiracy theorist, and it had led to heated arguments for 19 years with Marge. He didn’t play along tonight, she was out of control enough.

"See Harold, see?!" Marge bellowed, and more people began giving them that strange sighing and quick look that let you know you were disturbing them. "It even that looks like that place we hiked to last time until those men made us leave, said we were trespassing. Phht!"

Harold unfortunately remembered. It was on that very trip he had lost one of his most prize possessions. His great-great grandfather had brought the unique mirrored pocket watch all the way from Switzerland when their family first came to America in 1926. It didn't open easily, and didn't really look like a watch at all being the only strange piece like it ever made. Marge had warned him to be careful with it. Now thanks to his carelessness, the one of a kind pure silver heirloom was lost forever in the desert.

Marge continued her tirade after sucking the last of her third Margarita through the small straw. "I told you not to take the watch, but you had to take it everywhere..."

"Okay dear," he stood, he'd had enough. He put his hand out to help her up, and she began grabbing her things.

As she got up, Harold looked at the screen behind her and saw the Rover had found something. Then they showed a closeup picture of the object.

Harold froze. It was his great-great grandfather's watch. HIS watch. They hadn't opened it yet, and because of it's strange shape and unique design, they didn't know what they had found.

Harold moved quickly between Marge and the nearest monitor, blocking her view. He was sure he was turning red.

She was right. Dammit all to hell, she was right and he would never hear the end of it. That "Mars" Rover was 20 something miles from Pete's Sports Bar.

He spun her towards the door, and she bristled. "What are you doing? What's the rush?" But by that time she was past the TVs and into the doorway.

Harold spent the drive home hoping to God she never found out, but knew she would...and there would be hell to pay when she did. And not just for Harold...
at January 24, 2013