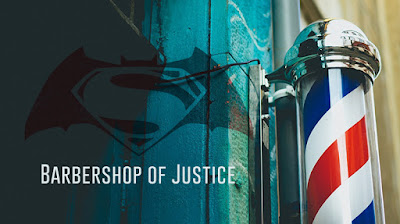 The boy squirmed in the chair, as the barber put the sheet over him and attached it behind his neck.

The old barber just smiled at the boy and then looked at his mother.

“What would you like for your little hero here, ma’am?”

The frazzled woman looked at her son, and then at the barber. “I’m hoping you may have more…industrial tools here than I have at home. He just needs a trim.”

The wise, old barber winked at her and walked to his cabinet. He pulled out his old trusty scissors. He’d had them since he first started cutting hair, and his father had used them before him in this very shop.

The scissors gleamed in the light, still wet from the sterilizing liquid they stayed in. The boy eyed him suspiciously, and he blew up from his mouth which rustled the little tuft of curly hair above his forehead.

“You just relax, sonny,” the old man smiled. “We’ll have you done in a jiffy.” Then the barber went to snip that little curly tuft. And the scissors snapped into two pieces. One half of the scissors clang on the floor. The boy’s mother sighed.

The barber looked in shock at his precious heirloom scissors. His father had cut hair for senators and baseball stars with these scissors, that now were completely broken and would never cut hair again.

The barber looked at the boy who was smiling with righteous indignation. The old man pulled another larger pair of scissors out, and tried to cut the tuft again, and once more the scissors snapped apart, this time breaking mid blade. Then the old man went over to the new electric clippers he had just found at the barber tradeshow.

“These suckers will cut anything”, he muttered to himself. The motor whirred and the barber went in to shave up the boy’s sideburns. But the clippers just stopped in the hair and smoke began to billow from the back of the razor. Finally, the boy’s mother tapped the barber on the shoulder.

“It’s okay, I think we may just have to try something else.” She then removed the barber’s cape and quickly got her son down from the chair. The barber stood, struggling to understand, mouth agape with the smoking clippers still in his hand.

The mother then left several dollars near the mirror and to

Across the barbershop in another chair, another boy sat watching the scene carefully. He looked at his own mother.

His mother smoothed out her dress, and adjusted her pearls, clearly uncomfortable in the old barbershop.

“See what honey?” she answered finally.

“That boy. His hair broke the scissors.” He stroked his chin. “And the razor.”

“Yes, dear. Well, we need to go. We have tickets for the opera, and you know how your father hates to be late. He’ll make us take some silly shortcut.”


While his mother paid, the boy looked in the mirror at his finished haircut. He saw one errant hair, and reached down and retrieved his multi-tool pocket knife that he had figured out how to hide in his belt. He flicked out some tiny shears and cut the hair. I should really keep more things in my belt, he thought.

Just then, he sprang from the barber chair into a crouching position.

“Bruce, quit fooling around!” His mother said, then pointed and shouted. “To the limo!”

The boy followed, but picked up half of the broken scissors on the floor, wondering if he could somehow turn it into some kind throwing tool?
at October 07, 2015