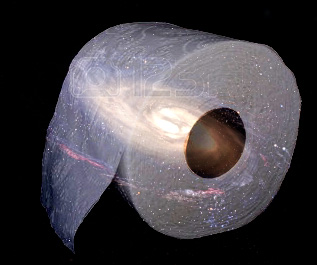 She said, “It doesn't matter how the freaking roll goes on the dispenser, Jon. Just replace it!” I could practically see her seething on the other side of the door.

She said, “Who cares if the toilet paper comes over or under the roll?”

I said, “You’re kidding right? It HAS to be over!”

She said, “Like it makes any difference in the universe.”

I imagined a universe inside the toilet roll dispenser. A universe that had no Milky Way above it at night, but an unending roll of white. The citizens of this universe lived generations, nay millennia according to whether the Great White Sheet blessed their prosperous, life-filled galaxy.

If the Great White Sheet came over the Great Roll, the populated galaxies enjoyed an age of great prosperity and long life. Each spin of the Great Roll above brought both relief and awe, as well as sometimes a strange but accepted odor.

But if the Great White Sheet came under the roll, millions perhaps billions would die. The universe would suffer greatly until the Great Roll changed, and brought a reprieve.

I heard the shouts and the cries of that doomed universe. I felt their anguish and grunted.

I tried to explain all this to her, in great detail. She remained silent on the other side of the door. Perhaps she was imagining the toilet paper universe as well. Perhaps she too could comprehend their deep despair and suffering if the roll was put on the wrong way. Perhaps she was finally getting it!

After a very heavy sigh she said, “Just wash your hands when you’re done.” Then she walked away from the door.

I replaced the toilet paper carefully making sure the paper came OVER the roll.

As I washed my hands, I smiled. I had a deep satisfaction knowing that, at least for this roll, all was right with the universe.
at June 07, 2015