An excerpt from the 4th Book of the Apostle John. 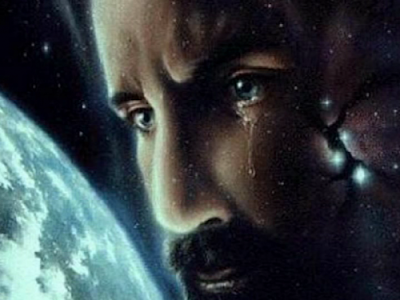 He wept for Mary, who some called Magdalene, but he had just called her “wife”. Her passing had come quickly. He was not prepared, but thanked his Father for the years Mary and he had together.

His tears flowed further. He wept for John, whom he had loved. All his disciples had attempted to keep on after he had stopped teaching, some meeting with great pain and suffering. John had stayed with him for many years, but eventually was discouraged when Jesus stopped actively ministering to crowds. John was the last disciple to leave him.

Jesus wept for Barabbas, the man Pontius Pilate picked over the crowd’s yelling for Jesus to be crucified. Pilate almost gave Jesus to them, but instead ordered Barabbas to be killed.

Jesus wept for himself. He knew ever since that day that he had missed his calling from the Father. That somehow his death would have been important to the Father’s plan. Jesus had been devoid of terror or panic then, willing to accept whatever God had in store. But he was still relieved when the cup was passed from him; relief which had turned to shame through the years.

The prophesies all pointed to his death, to his resurrection, to an amazing plan God had set in motion. How could the prophets be wrong? Their predictions seemed so certain, so perfect, so impossibly true.

He imagined his death might have been the ultimate sacrifice for man, the most holy sinless lamb, to be slain for the sins of all. His blood could have become known as a symbol for forgiveness and resurrection. Those who believed in him could have also known the Father.

Instead, he had simply lived out his life in quietude, prayer, and teaching God’s word to local children. After the turmoil and unrest his popularity had begun to cause, he had retired away from the crowds and away from the Roman tyranny. Both his Mary, and his mother had seen to that, to keep him safe. A forced exile.

But what had his safety and their peace of mind cost him? What had it cost the world?
Then Jesus wept again, this time crying harder and touching a hand to the ground as he knelt. He cried for all of mankind. In missing his call, he may have doomed all of humanity the chance to find his Father. He might have been the bridge for any man to be in relationship with the Living God. Jesus always felt that he was meant for something more, but now he would be alone, getting older, of use to no one.

Thunder rolled overhead, and Jesus could smell rain in the air. He didn’t see John approach, but heard his voice.

“I’m sorry about Mary,” John said, and put a hand on Jesus’ shoulder.

“I’m sorry for many things. I know not what I have done,” Jesus said, sniffing away more tears.

After a long while, John spoke. “Perhaps, Rabbi, we could go out and speak to the people. Perhaps, it is time to continue your work.”

Jesus turned and wiped his eyes. “It is too late. I, and indeed the world, are lost.”

John smiled and helped Jesus to his feet. “And that, is why they need a Savior.”